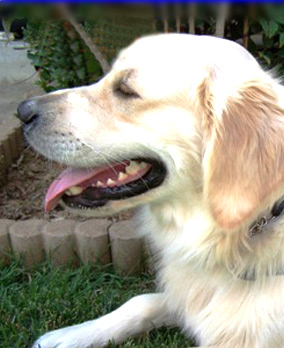 Scout was donated to Big Paws Canine at the age of 10 weeks. Scout spent his early training with his trainer in Roosmore, California and had the opportunity to work with rescues from Bryson Air.

Scout is currently working with a Disabled Veteran in Hollywood, California and loves to take his handler on walks. Scouts handler was nervous meeting him, because there were a lot of dogs present and the handler struggles with trust issues. Scout was very sweet and the handler knew it was going to be ok at that point. That very first night, Scout woke his handler up out of a night terror by jumping on my bed and licking the handlers face. The handler’s spouse, who was right night to the handler, did not even know what was going on, yet somehow Scout did. They hadn’t even fully bonded yet!

Now, Scout takes his handler to restaurants, the park, school, the grocery store, and anywhere the handler needs to go. Scout makes his handler feel very secure and the handler has never slept better than now, with Scout around! Sometimes, the handler forgets Scout is not human. Sometimes Scout does too. Scout often picks a pillow off the couch, pulls the corner with his teeth and then carries it to his favorite hang out spot. Scout puts the pillow down, then flops on the floor with a thud and lays his head right on the pillow! Scout also loves to carry around his stuffed animals like a security blanket. Scout has definitely become an integral part of the handler’s life and healing!