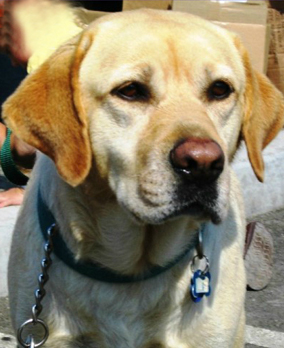 Nitro was the reason that Big Paws Canine was created. Not only tuning into his owner’s ailments, but other’s as well. Upon bringing Nitro to a hospice/rehab center to visit a dear friend, it was clear that Nitro could sense the pain and sickness around him. He proceeded to each room and gently approached each patient with the nurse’s approvals, and rested his head on the laps of many new friends. After several visits, patients would make sure that they completed their physical therapy, ate and showered so that they could visit with Nitro.

It was through these visits that Steve and Mary learned of the amazing health benefits, both physically and mentally, to these patients.

Nitro has since retired to teaching the new Service Dogs the ropes. He will train the new pups and regulate the older ones if needed. He enjoys being outside in the back yard where he is often caught sunbathing by the pool and often needs to be dried off before coming into the house for the night!