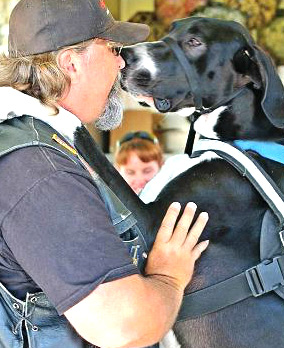 McGee (The Magnificent) was named after Timothy McGee of the TV Show NCIS.
He belongs to Greg and Madeleine McAulay and has been with Big Paws Canine Foundation since October 2012.

McGee was supposed to be Madeleine’s pet and when Greg had a devastating Motorcycle accident on 9/11/2012, which compounded his service connected disabilities, McGee was pressed into Service. They met Big Paws Canine in the beginning of September 2012 at the Norco American Legion and were very impressed by their mission and goals and wanted to support them. They called Steve Slavik and arranged to meet to look at the possibility of turning McGee into a Mobility Assistance Service Dog. Steve, Madeleine and Greg began working with McGee on a weekly training schedule and he learned fairly quickly.

McGee helps Greg by stabilizing him as Greg goes about his daily work and life. McGee works as a mobile cane. He has learned to brace when helping Greg to get out of a chair, out of the pool or jacuzzi. He goes to work with Greg and is his constant companion.

Due to McGee’s size, as a typical Great Dane, he is often the spokesperson for Big Paws Canine. He will draw a large crowd which enables many conversations about Service Dogs and helps to educate the public.