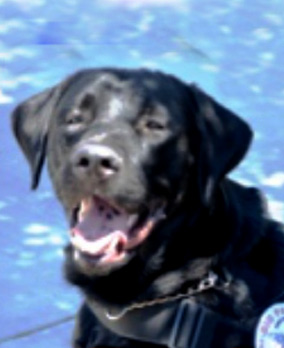 Named after the Battleship USS New Jersey, Jersey was presented to Big Paws Canine Foundation at three months of age, and immediately took to his training. He traveled with his brother Artie from Minnesota to South Dakota to California and trained with Diesel, Boom and Nitro in Mira Loma, California.

Jersey continued his training to assist with mobility and PTSD concerns. It was discovered that Jersey tuned into his handler’s ailments and as such is being trained to alert to narcolepsy episodes.
Jersey is very lovable and playful, and excels in public on a leash and is well behaved even with distractions. Jersey has a confident strut when he is working in public and is able to clear a walkway for his handler like the best of our mobility Service Dogs.

Jersey has made many appearances at the Ontario Improv but his favorite thing to do when he is not working is to take a nap close to his handler.