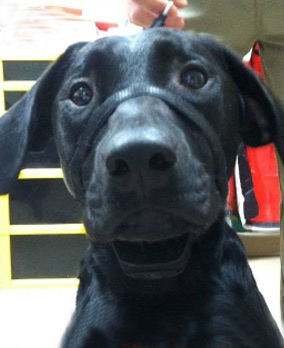 A friend asked Rob Dickerson to help him pick out a dog, not a Service Dog… a dog for a companion. So Rob and his wife Gail, the Foster Coordinator Midwest, set off to the local no kill shelter. A litter of pups had been left in the night drop off box and the best guess was that they were about 8 weeks old. One charming little black lab mix was chosen.

As circumstances sometimes intervene, it turned out this person’s living arrangement was not a good one to add a puppy to … so the little pup now named Huey (like the helicopter) came back to Rob and Gail’s house to be fostered and trained to one day find his perfect match.

One such family seemed to fit the bill and the prospective recipient began training alongside Gail and Huey and all seemed to be going quite well, but as we indicate in all of our interviews and applications, everyone in the house must be on board with the prospect of bringing a dog into the home and all of the responsibilities that go with… unfortunately, once again, through no fault of his own, Huey was returned to Gail and Rob’s house.

Poor little Huey… although he was happy enough in the pack at Rob and Gail’s house, he seemed to know that he was destined for something and someone else when fate stepped in and along came Solo. Solo is a retired Army – Chief Warrant Officer… Ranger…. and Chinook Pilot.

Fate can be beautiful, and when we see Huey and Solo working together we realize that everything does happen for a reason!! The little pup that didn’t fit in has found his calling. Solo has chosen April 14, 2013 as Huey’s birthday and in less than one year Huey has not only shown to be excellently behaved in public, but also a master at tasks for his recipient. He clears rooms, and alerts to anyone within 10 feet of Solo, can roll a human into the “rescue position”, he empties the dryer one piece at a time, giving each item to Solo so that he doesn’t need to bend, he “paws up” at cash registers to take and carry packages for Solo and is beginning to learn the word and action “brace” so that when he is two years old he will be ready to be a mobility assistance dog for his handler. Huey and Solo accompany Rob, Gail, Scott, Artie and Moto for public education and awareness speaking engagements and charms every crowd with his abilities, especially his “Salute”.

* Huey Certified with Big Paws Canine in June of 2014