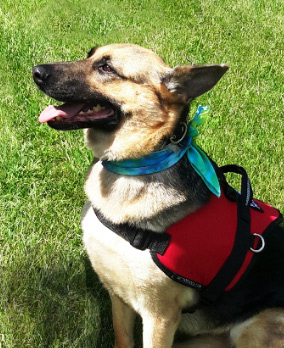 Casper came to her handler in a very special way, to make a match made in heaven. Casper had been homeless and pursued for almost a week before the humane and police officers finally caught up to her.

Casper’s handler had just lost a German Shepherd. Several contacts were made, and Casper and her handler were introduced and fell in love almost instantly.

Since their uniting, Casper has thrived and become a beautiful Shepherd. They began training with Big Paws Canine and certified and a team in June of 2014

Holding heads high, Casper and her handler walk proudly knowing over the last months their advancements have been never ending, and continue to grow as they work their Task Training.

We hope this dog’s story has inspired you. If so, please make a donation and help her and other service dogs get the training they need to be a companion for our veterans!