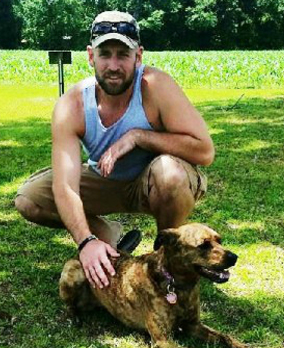 Little River resident and Army combat veteran Justin Miller knows all too well the implications of PTSD, having served just over 11 years, including 27 months total in Iraq on two deployments.

He says he deals with his situation a day at a time.

“Some days are good – my memory is good and I don’t seem to have many issues, but other days I can’t remember things from five minutes ago. Or just simple words – I’ll be in the middle of a conversation and just go blank.”

“Loud noises, fast movements or unexpected touching,” he said. “My wife knows. I could be sitting at the table and my wife comes out, puts her hand on my arm – and if I’m not seeing her coming, it’s enough to make me jump.”

A major factor in his progress has come from his service dog, Bella – a 3-year-old Louisiana Catahoula Cur that was given to him by a friend who was stationed at Fort Stewart, Ga., because his friend was under the impression that Bella was a Pit Bull/Lab mix, and Pits are banned on post.

“When I was in the process of getting medically retired, I was trying to get Bella certified as a service dog, but my retirement came nine months sooner than I was told and it didn’t end up getting finished, he said.

But a fortuitous event came about at the Blue Crab Festival. While he was volunteering at his church’s booth [Renovation Church in Longs], an outfit called Big Paws Canine Foundation had a tent set up right next to him.

Big Paws Canine Foundation [www.bigpawscanine.com] had recently opened up a location in Aynor, with existing branches in Southern California and Sioux Falls, S.D.

“I took Bella out there, and they monitored her to see if her mannerisms were good enough and if she behaved well enough to be around other dogs and people,” he said. She can’t show any type of aggression and has got to be a gentle, welcoming dog.”

She is – and after advising Miller of the things he needed to continue to work on with Bella and what would be involved on the test for certification, she passed and is now a bona fide service dog.