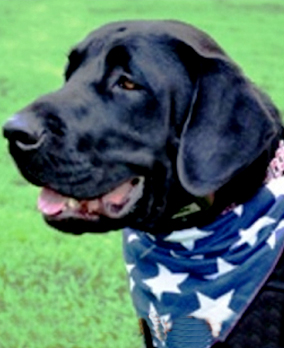 Artie was presented to Big Paws Canine Foundation at three months of age, and immediately took to his training. He traveled with his brother Jersey from Minnesota to California and is currently training in Mira Loma. Artie can be seen all over Southern California working with his trainer, often at the Long Beach VA Hospital. Artie will soon be starting his home trials with a Disabled Veteran in the Long Beach area.

Artie’s demeanor has continually attracted attention wherever he goes. Artie will continue his training to assist his handler with mobility and PTSD concerns. Artie is very attentive and loves to “Go to Work”. Artie excels in public on a leash and is well behaved even with distractions.

Artie was known as Thunder in the beginning and his full name is Artillery Thunder. Artie assists Rob with a multitude of things including joining Rob when he speaks to groups to bring awareness and understanding for those facing PTSD and the unacceptable suicide rate within the military and of Veterans.